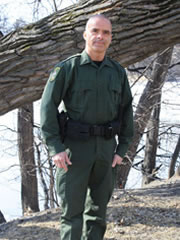 Every day it's something new. People who do this job do it because they love the outdoors and they love the fact that it's not the same thing day in, day out.

It’s hard to imagine what Manitoba’s provincial parks and recreational areas would be like without Natural Resource Officers (NROs).

When people think of NROs like Robert Belanger, they probably think of someone who’s there to enforce our province’s hunting and fishing laws. And while NROs do protect our wildlife, fish and forests, they’re also there to ensure our provincial parks are safe, peaceful, and enjoyable places to visit and live.

You'll find NROs in more than seventy communities throughout the province. So, when forest fires are threatening, highly trained officers are right there in the community to help people stay calm and safe. When wildlife poses a threat to people, officers are there to educate and protect.

“Every day it’s something new. People who do this job do it because they love the outdoors and they love the fact that it’s not the same thing day in, day out,” says Belanger.

One day they might be checking people’s fishing licenses or investigating a noise complaint and the very next they might be watching for hunting out of season or looking into a fire during a burning ban. And sometimes the job takes them into criminal situations. For example, NROs are instrumental in fighting illegal fish trafficking. That’s right; according to Belanger, hundreds of thousands of kilograms of illegally caught fish is moved and sold around the province every year.

“Without NROs in communities watching for this kind of activity, this problem would quickly get out of control.”

Truth is, without public sector workers in our provincial parks and recreational areas, there would be hundreds of problems that would quickly get out of control. Could you imagine what our forests, lakes and streams would look like? Over fishing and hunting would severely deplete fish stocks and wildlife populations. Fires and illegal logging would wreak havoc on our forests. And the safety and security of visitors in our parks and campgrounds would suffer.

An NRO’s job is to care for our environment, while teaching others to respect our natural resources – and thanks to these hard working women and men, we will continue to enjoy all that Manitoba’s wilderness has to offer for generations to come.