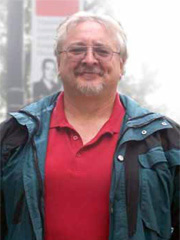 MGEU GOLICO member, Ed Miller was recently profiled in our National Union's All Together Now Campaigner publication. Here's what he had to say as a Champion 4 Change.

IN PORTAGE LA Prairie, Manitoba, many people know Ed Miller from his work at the local Liquor Mart. He’s quick with a joke and a smile, good advice on the appropriate wine and the nuances of fine single malt scotches.
The affable Miller sees himself a little differently.

“As a Liquor Mart employee, I know our hard work and service contribute to better schools, health care, parks, recreational amenities and social programs,” he says. “Unlike private liquor stores, I know the profits from the sale of beverage alcohol go to help all Manitobans by supporting services that make a difference in our communities and to families.”

Miller knows better than most the importance of quality public services, such as universal health care, because families like his have been helped immeasurably during difficult times.

“All three of our children have, at different points in their young lives, been saved by our health care system and the dedicated professionals working in our hospitals,” Miller says. “For example, our daughter had cancer and we watched how families were dealt with and treated by those professionals. Not every family was as lucky as us but everyone was treated with exceptional care and dignity.”

Miller, a 20+ year union activist with MGEU/NUPGE, understands the importance of protecting and strengthening public services.That’s part of the reason he became a Champion 4 Change and a Champion 4 Pensions.

“Families shouldn’t go bankrupt trying to save their children. I’m proud to live in a place that requires only a health card, not a credit card, to make that happen. I am happy spreading the word about tax fairness and why defined benefit pension plans ensure a stable standard of living for seniors on fixed incomes.”

“Some people simply don’t understand what’s at stake with Harper’s tax cuts, pension changes and cuts to Old Age Security,” he explains. “I’m passionate about getting the truth out and helping strengthen the fabric of our social safety net.”
“It’s been a rewarding experience,” he says.

“I like meeting people, I like connecting to members of my community, and I get to do that in this role which is fulfilling on a number of levels,” he says.

And on another level, too, as a Liquor Mart employee, he gets to deal with the public and talk about things that he feels some passion for.

“That’s for sure,” he laughs. “A good scotch is worth talking about, too.”