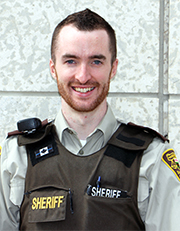 The part about my job that I like the best is knowing that I contribute to helping keep Manitobans safe.

As a Sheriff’s Officer, every day is a new experience for Jason. As a peace officer, he could be arresting someone found to have drugs or flying into a remote community with an inmate for a court appearance. It’s a rare occasion where two days are the same.

Sheriff’s Officers also provide security for people attending proceeding at any courthouse in Manitoba, including judges, court clerks, and other court staff. Jason screens for weapons, drugs, and outstanding warrants and also removes disruptive individuals from the courthouse under the authorization of the Court Security Act.

Another important part of Jason’s job involves the transportation of people in custody to various locations in Manitoba, taking them to jail or court in addition to providing court security in rural locations alongside the RCMP and other agencies. They travel by boat, helicopter, airplane, hovercraft and vehicle. Sheriff’s Officers handle some of the most notorious and dangerous criminals in Manitoba from Churchill to Emerson.

A Sheriff’s Officer 2, Jason also has to serve court documents, writs, seizures, and property evictions as part of his day to day duties. Jason is involved with the union and serves as a steward for Local 26.