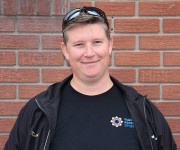 I'm grateful that I'm able to work one-on-one with our tenants at the Main Street Project on a daily basis. I enjoy that part of my work the most.

Kerri Smith has worked as a Support Worker for the Main Street Project since 2013. She has performed a number of roles, including Support Worker, Transition Worker and Detox Intake Worker. Most recently she moved into the role of Supervisor at the Bell Hotel.

The Bell Hotel is a 42 suite Housing First building, the only one of its kind in Manitoba.  Main Street Project provides 24-hour support services onsite to the tenants at the Bell. Kerri is grateful that this role allows her to continue working on a one-on-one basis with the tenants, while overseeing the day to day running of the Bell. In all of these roles that she has undertaken, her principal job has been to advocate for some of Winnipeg’s most vulnerable and marginalized people, ones that experience mental health and addiction issues.

Including the day to day supervision of staff and daily activities, Kerri currently facilitates three specific programs: a daily smudge, a weekly community/sharing circle, and community soup on Fridays. The programming is designed to give the tenants a sense of community and to help bring them together.

Kerri has been involved with Local 136 for in a variety of roles. Over the last four years she has been given the opportunity to hold several positions within it, from Steward to her current role as President. These positions have all had their challenges and rewards. As President, she felt both privileged and honored that her co-workers believed and trusted in her ability to take on that role. In this position she was able to work with the employer to finalize and ratify a new collective agreement. She has also represented her colleagues on the Labour Management Committee.