All MGEU members work under the protection of a contract (aka collective agreement) negotiated with their employer. In fact, the MGEU oversees hundreds of contracts, covering more than 1,000 job classifications.

These contracts are usually effective for three or four years and cover a wide range of work-related concerns, including wages, hours of work, benefits, overtime, and safety and health.

The bargaining process begins at Local meetings where MGEU members elect their negotiating representatives. Those elected to the Committee are responsible for organizing a series of meetings to collect bargaining proposals. Members must fill out the Bargaining Proposal Form (Civil Service members fill out a different Civil Service Bargaining Proposal Form) to bring to a meeting, where it is voted on by other members. The process provides every member with the opportunity to share what they’d like to see in the contract, or suggest improvements to what currently exists.

How an idea becomes part of your contract infographic 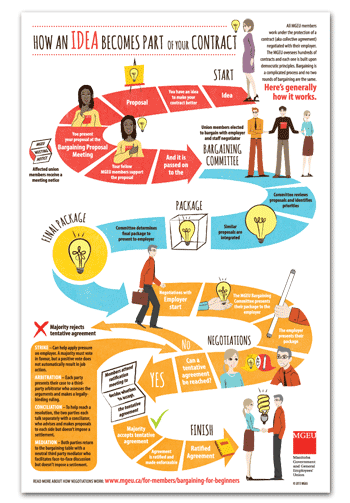 Based on the feedback at Local meetings, the committee pulls together a package of proposals to take to the bargaining table on behalf of the members.

The employer also comes to the table with changes they’d like to make to the contract.
The negotiating process, which can last anywhere from a few weeks to several months, usually involves a kind of give-and-take, with the union Committee working at all times to gain and/or maintain as much as possible for its members.

At key times in negotiations, the Committee may send important updates to members (via e-mail,Facebook, or phone) or mail you a bargaining bulletin. You can also check out the bargaining briefs to see where negotiations are currently at. In other cases, the details about negotiations will be limited so that the Committee’s position at the table is not compromised (remember, anything sent to members is usually also read by management).

If your Local is headed into bargaining, be sure to update your contact information with the union.