Every year, the MGEU trains members to assist in bargaining contracts and ensure those contracts are honoured by their employers.

Getting active in the union is a great opportunity to expand your horizons while on the job. The union sponsors your courses, the employer gives you time off, and you learn the kinds of skills that look great on a resume — like public speaking, conflict resolution, how to run a meeting and effective leadership.

How to Get Started

When you're elected as a workplace rep (the union also sometimes refers to these members as activists), your employer agrees to allow you time to carry out union business. Time-off can range from an afternoon meeting with a co-worker who needs help, a day-long training session with the union, or weeks at the bargaining table. 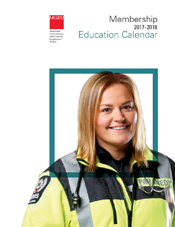 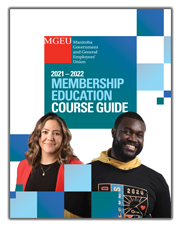 These elected leaders in MGEU Locals are an integral part of making our union the best it can be and they're encouraged to take advantage of the wide range of educational opportunities available.

Roles and Responsibilities of Workplace Reps

As an MGEU member, you belong to a union Local. Every two years, most Locals elect a president and chief steward to act on their behalf. These representatives are responsible for responding to your workplace concerns and making sure your employer is following the terms of your contract.

The president also chairs Local meetings and, in most cases, sits on the bargaining committee.

Larger Locals can also elect a vice-president, members-at-large, and a number of workplace stewards to meet the needs of their membership.

Some groups of members share specific interests, such as a common employer or contract (aka collective agreement).

For instance, Crown Corporations such as Manitoba Public Insurance, are broken down into Locals according to workplace locations throughout the province, but also belong to a single Component.

Similarly, health care aides in Manitoba negotiate their collective agreements at a common Health Care Support Services bargaining table, but elect their Local leadership based on the personal care home where they work.

Every two years, Components elect a Component Director to represent their overall interests.

Since members will often share common concerns based on where they live in the province, each MGEU Local also belongs to an Area council.

The presidents, vice-presidents and chief stewards of all Locals in and around Thompson, for instance, regularly meet as Area Council 8 to discuss issues of particular relevance to Northern members.

All decisions about the MGEU’s overall direction are set at a Convention held every two years in October. At a Local meeting, you will elect a delegate or delegates to represent you and co-workers at the Convention. They will help to elect the MGEU Executive (the President and four Vice-Presidents) to a two-year term, and vote on a broad range of goals and priorities for the union over the next couple of years.

Throughout the year, the MGEU Executive provides direction for the union with the assistance of a 23-member Board of Directors. Most Directors start out as Local reps and are elected from specific Locals or Components and each of the union’s eight geographical Areas.

Want to find a way to further your role as a Workplace Rep? Here are two ways to do just that...

Apply for the Membership Training and Apprenticeship Program

The MGEU also provides an opportunity for an experienced workplace rep to learn more about the union and, in particular, the role of a staff representative. The Membership Training and Apprenticeship Program (MTAP) provides an opportunity to work closely with MGEU staff representatives during a six-month, on-the-job work experience. At least one position is advertised annually. Applicants are selected through an interview process. When available, MTAP training opportunities are posted on our Employment Opportunities page.

MGEU member co-facilitators work cooperatively with MGEU staff to deliver union education courses to elected workplace representatives. For experienced MGEU workplace reps this is a great opportunity to share their knowledge with other members, while furthering the goals of the MGEU’s Membership Education Program. For more information about this opportunity, visit The Source and click on the "Education" tab.