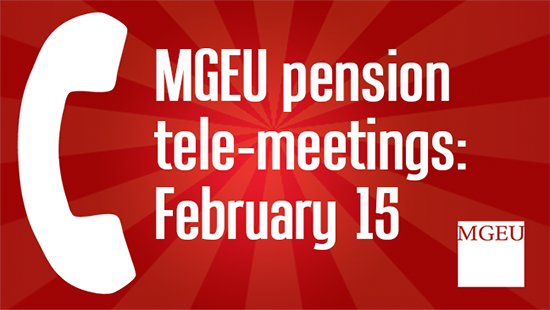 On Thursday, February 15 the MGEU is hosting tele-meetings for members in different pension plans to learn about the provincial government’s proposed changes to Manitoba pensions – changes that could reduce benefits and shift financial responsibility from employers to employees.

Two tele-meetings are being planned for that evening:

Active MGEU members within these affected plans will be sent both phone and email invitations from the union leading up to February 15. On the day of the call, those members will receive a phone call a few minutes before their tele-meeting begins. Members can simply stay on the line to join the tele-meeting or use their computer or mobile device to listen in online. Non-active MGEU members (such as members on leave or retired members) can also tune into the tele-meeting online.

If you're a member, you should ensure the union has your current phone number(s) on file for the meeting call out. You can update your information online before February 11.

How potential changes could impact your pension

During the 2016 election, the PC Party pledged to MGEU members that, if elected, they would make no changes to public pensions.

But the changes now being proposed tell a different story. The government recently announced that it could be looking at introducing new pension plan designs (targeted or shared-risk pension plans), which would place more of the financial responsibility for funding plans on employees, instead of employers. This would have a significant impact on how secure pensions in Manitoba are funded, managed, and provided to members.

For this reason, the MGEU opposes changes to legislation that would enable the introduction of targeted or shared-risk pension plans and remains committed to protecting public pensions and ensuring that the government lives up to its election promise to protect them.

“Our members, who have worked hard and invested in their own pension for many years, deserve a secure retirement,” says MGEU President Michelle Gawronsky. “What we’re seeing now is a move to open the door to reducing those benefits for current and future retirees; so it’s very important that all pension plan members understand these proposed changes and voice their opinions.”

Tell the government to protect your pension

The Provincial Government will not be holding public meetings on any of these proposed pension changes to pensions. Instead, they’re accepting written comments and the MGEU is asking members to send their opinions. If you are unsure about what the proposed changes might mean to your pension, please review the Q&A About Pension Changes that the MGEU has prepared and listen to the tele-meeting before emailing your comments to the Office of the Superintendent, Pension Commission at pensions@gov.mb.ca.

We need to tell the Pension Commission:

Please note: the closing date for submissions to the Pension Commission is February 21, 2018