A new CCPA report released today detailing how more and more services are being privatized at Manitoba Infrastructure (MI) and the Vehicle and the Equipment Management Agency (VEMA) is raising serious concerns for the safety and integrity of Manitoba’s infrastructure network.

“The government is moving ahead with infrastructure changes that have proven unsafe in other jurisdictions,” said MGEU President Michelle Gawronsky. “Private contractors in neighbouring provinces have been shown to cut corners and put public safety at risk.”

The report follows a departmental review completed by external consulting corporation PriceWaterhouseCoopers (PwC), who were contracted to develop options and recommendations for “Alternative Service Delivery”— code words for privatization.

One of the report's authors, Jesse Hajer, said, “According to the employees interviewed, the cuts and contracting out taking place in Manitoba Infrastructure and VEMA are significantly compromising the ability of these workers to do their jobs effectively and maintain important provincial assets at acceptable service levels.” 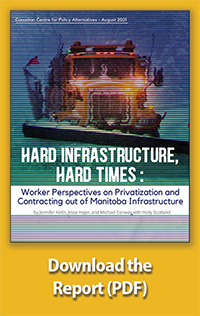 The report echoes what the MGEU has been saying about MI/VEMA privatization for years and highlights how public services in MI/VEMA are being dismantled through:

Hajer said that according to the vast majority of workers, job quality, safety, efficiency, value-for-money, and the integrity of their workplaces are being compromised, and morale appears to be at an all-time low.

“Members believe that the government is pursuing a politically-led strategy by starving the public sector, refusing to fill vacancies, and eliminating any kind of training and performance planning,” he said, adding that the workers who were surveyed in their research have serious concerns about the future of MI and the move to more private service delivery.

Results of the members surveyed showed that:

This takes a toll on morale, and members’ ability to feel they’re delivering the kinds of service that Manitobans deserve.


Gawronsky said the comments from one member who works in snow clearing sent chills down her spine: "when you’re on the road yourself and you see a bunch of wrecks on the highway and ambulances and stuff, it’s a pretty hard thing to take home knowing what could have been done better.”

“The study released today is a huge caution flag,” said Gawronsky. “Members are warning this government that the privatization road they’re going down will either increase costs to Manitobans or sacrifice road safety in our province.”

Send a message to Government. Tell them to keep Manitoba's highway and vehicle maintenance services PUBLIC.