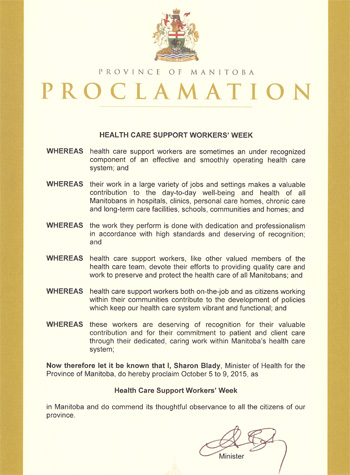 The Province has proclaimed Monday, October 5 to Friday, October 9, 2015 Health Care Support Workers’ Week, a chance to salute the thousands of front-line workers like you who care for Manitoba’s most vulnerable citizens.

“The important services these members provide in our health care system are essential to the well-being of so many Manitobans,” MGEU President Michelle Gawronsky said, “and yet they’re rarely recognized for their role in keeping our health system going. Many of often feel their voices aren’t heard when it comes to the ongoing issues in their workplaces.”

Recently, the union worked with members in Prairie Mountain Health to try and tackle some of the ongoing morale and safety issues in their region. Thanks to HCSS workers and their supporters, MGEU representatives presented a thousand signed postcards to the Minister of Health, garnered good media attention, and are now hopeful that scheduled meetings with the employer will yield results.

“But I know Prairie Mountain members are not the only ones,” Gawronsky said. “Problems such as staff shortages and a lack of respect for front-line concerns exist in every health region.”

She encouraged all Manitobans to join with the Province in celebrating health care support service workers’ valuable contributions to the health and dignity of Manitobans. “But let’s not stop there. Initiatives like our Prairie Mountain postcard campaign are a very important reminder to employers that there’s much more work to be done. Recognizing their work must also means recognizing their voices and their issues.”

The MGEU represents over 8,000 health care support workers throughout the province.

“I would like to take this opportunity to express my own gratitude for the caring and dedication they provide others, day and night,” Gawronsky added. ”Their work is physically tough, often mentally draining, and always vitally important."