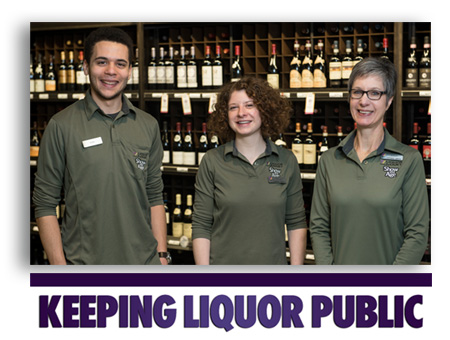 Today, the Keeping Liquor Public Coalition has been unveiled, along with a new interactive website (keepingliquorpublic.ca) that highlights the benefits of Manitoba’s public liquor system.

“Our current system does a great job of balancing great selection, competitive pricing and social responsibilities,” says MGEU President Michelle Gawronsky. “If we were to privatize this important public asset, hundreds of millions of dollars in revenue for public services like health care, education, and programs for families would be lost. For the benefit of all Manitobans, we can’t afford to do that.”

The Keeping Liquor Public Coalition believes the time is right to remind Manitobans that, while a healthy majority of adults can enjoy a glass of wine or a couple of beers at the lake or a Jets game when they want to, there are other factors that should be considered when it comes to the sale and distribution of beverage alcohol.

In addition to the sales model, there are other issues that several partners pointed out in their decision to create the coalition.

“Most research shows that increased access and reduced control leads to the increase of problems related to the use of alcohol as well as increased access to alcohol by minors,” said Yvonne Block, former CEO of the Addictions Foundation of Manitoba. “The benefits of public ownership outweigh what I see as relatively short-sighted benefits of privatization — both economically and from a public health perspective.

“MADD Canada believes that the safest way to sell and market alcohol is through government controlled liquor stores,” said Andrew Murie, Chief Executive Officer of MADD Canada.” This system assures the public there is a balance between the sale of alcohol and public health. Government employees are trained not to serve minors or intoxicated customers.”

The coalition partners include a wide array of organizations dedicated to our communities:

Visit keepingliquourpublic.ca or view the fact sheet to learn more about the benefits of Manitoba’s public Liquor Marts and help spread the message.