In response to privatization efforts, home care workers from across Manitoba presented the government with 15,000 signed hearts that read, "My heart supports home care for people... not profit," on April 16, 1998.

Today, the MGEU is celebrating Public Home Care Workers Day to recognize those on the “front-line” of Manitoba’s universal home care system — one that is recognized across North America as a leader in providing compassionate, professional and timely care.

“This is actually a significant date for all those who currently help tens of thousands of Manitobans remain as independent as possible for as long as possible,” said MGEU President Michelle Gawronsky. “It was twenty years ago, after two years of experimenting with private delivery within our home care system, the Filmon government abandoned their privatization plans.”

In response, on April 16, 1998, home care workers from across the province marched to the legislature to present the government with 15,000 signed hearts that read, My heart supports home care for people... not profit. At the time, the event demonstrated just how strong the resolve was for MGEU members and Manitobans to keep home care public.

“But unfortunately, our current government doesn’t seem to be learning from past mistakes.” Gawronsky said. “In fact, We Care, one of the corporations that they’ve recently hired to deliver home care services to patients transitioning out of hospital, was also involved in the failed privatization scheme of the 1990s.”

Recent polling results show that Manitobans are overwhelmingly opposed to privatizing the province’s universal home care program and think such changes to our health care system are motivated by the bottom line rather than improving care.

“During the last election, this government promised us that they would protect public services, only to contracting out part of home care to a Toronto-based corporation,” Gawronsky said. “They’re ignoring the priorities of Manitobans, not to mention past experience and research that shows private companies, who must worry about pleasing shareholders and making profits, don’t deliver better care and don’t end up saving money for taxpayers.” 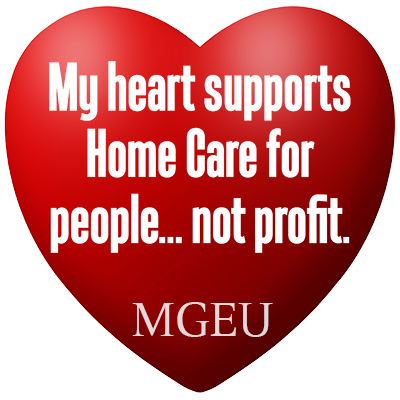 “This was profoundly disappointing given the vital contribution of these workers and value of this program in our province,” Gawronsky said. “In the end, we decided that if they won't do it, we'll recognize it without them.”

Please show your support on Facebook by sharing our union's posts today and change your profile to the “My heart supports home care for people... not profit" image.

“Privatizing home care didn’t work in the 1990s, and it won’t work now,” she added. “Manitoba already has a comprehensive public home care program that is among the best in Canada. We need to build on that system, not auction it off in pieces.”