In the wake of two violent attacks to Correctional Officers in the past two weeks, MGEU President, Michelle Gawronsky, is calling on Manitoba Justice to initiate immediate health and safety reviews in all Correctional facilities.

The first incident occurred at the Brandon Correctional Centre on Sunday, November 10th, and the second incident was last night at the Remand Centre in Winnipeg.

“Both injured officers suffered concussions and both were taken to hospital.  We’re grateful that they have been released and are now recovering,” Gawronsky said at a press conference held today at the Union Centre.

MGEU members have said both attacks have cast a chill over their workplaces and members are on high alert. While these latest attacks are more severe in nature, members are saying that violence in our jails is increasing and that getting punched, kicked, spit on or verbally assaulted are daily occurrences.

“We are calling on Manitoba Justice to take immediate action and review the routines and how inmate checks are performed. This has to be a priority. We need to be proactive.” 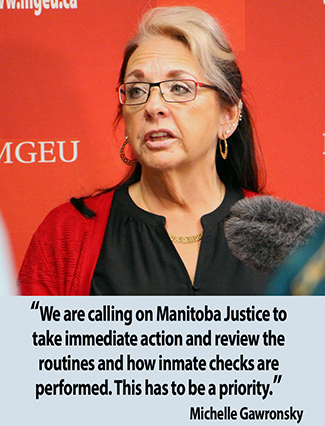 The MGEU is also pushing Manitoba Justice to take mental health well-being more seriously and ensure supports are available for officers when they are needed. Physical injuries are ones we can see, but many of our officers are suffering mental health issues because of the increase in violence.

“These officers are moms, dads, sons and daughters and they deserve to feel safe at work and go home to their families at the end of their shift.”