Justice McKelvey agreed with the evidence put forward by the Partnership to Defend Public Services (pictured above) -- a coalition of public sector unions of which the MGEU played an active and leading role.

After three long years of standing up for the rights of public sector workers to sit down and negotiate their wages with the Pallister government, today is victory day.

Manitoba Court of Queen's Bench Justice McKelvey has ruled that the government's wage freeze law, the Public Services Sustainability Act (Bill 28), and its actions to impede collective bargaining with Manitoba's public sector workers are a violation of the Charter of Rights and Freedoms.

In the ruling, she agreed with the evidence put forward last fall by the Partnership to Defend Public Services -- a coalition of public sector unions of which the MGEU played an active and leading role -- and strongly rejected the government's legal arguments, cautioning them to stop interfering with collective bargaining in the public sector.

For instance, she stated the Act "... is a draconian measure which limits and reduces a union's bargaining power...and inhibits the union's ability to trade off monetary benefits for non-monetary enhancements, such as protection from contracting out, job security, and layoffs. It has left no room for a meaningful collective  bargaining process on issues crucial to union memberships." 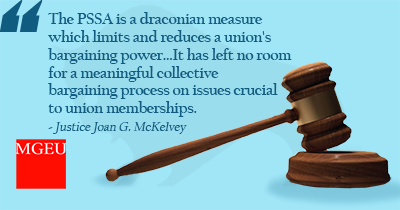 "I am deeply proud of the many contributions our staff made to the PDPS case, including researching supporting documents, reviewing affidavits and bargaining notes, meeting with our lawyers to prepare for the trial, and giving evidence," MGEU President Michelle Gawrsonky said. "Our hope now is that we will be able to return to the bargaining table and negotiate fair collective agreements for our members without heavy-handed tactics from the government."

She pointed out that throughout the pandemic crisis, thousands of MGEU members have been working incredibly hard, under incredibly trying and stressful conditions, while at the same time, the government's disrespectful approach in dealing with its own public-sector workers have taken a toll.

"This victory, however, should give us all reason for hope," she said. "We can now move forward with the Charter of Rights and Freedoms on our side, in the hope the Pallister government can see the writing on the wall. Fairness and respect towards hard working people matters more than ever to Manitobans. The time has come for the Pallister government to change course and start treating dedicated public sector workers with the respect they deserve."