In the Wake of the General Strike 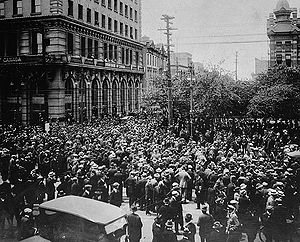 After the First World War, when minimum wage safety standards, unemployment insurance and sick leave were non-existent, Manitoba workers began increasingly coming together to argue for basic employment rights. In 1919, frustrated by their lack of progress in gaining even the most basic concessions from employers, over 30,000 Winnipeg workers went on general strike.

It was in this climate of social and political change that the Manitoba Civil Servants’ Association was formed to “improve the conditions and advance the status of civil servants.” Members came together to create various benevolent funds to help the widows and orphans of government employees, as well as the ill or injured.

The Manitoba Civil Servants’ Association operated largely as a recreational club that also tackled employment-related issues. In 1939, for instance, civil service employees began participating in a pension plan for the first time, and managed to see a reduction in hours of work.

But during the Second World War, the federal government, attempting to diffuse working class discontent and provide a stable pool of labour for the war effort, legalized collective bargaining.

In 1943, the government "recognized" the The Manitoba Civil Servants’ Association but the relation lacked any formal certification by a labour relations board, no legislative requirement to bargain, no obligation to implement agreements, and no procedures for settling disputes.

At a convention in 1950, delegates adopted a new name: the Manitoba Government Employees' Association. In 1957, MGEA members with Crown Corporations like the Manitoba Liquor Corporation gained the right to bargain with their employer. It took those in the Civil Service until 1966 to sign their first agreement with the government. But there was still no dues check-off, and members had no right to strike.

Into the 21st Century

In the 1970s, the MGEA re-structured from top to bottom to deal more effectively with contract negotiations. It joined the Canadian Labour Congress and Manitoba Federation of Labour. And two Components in two years – Corrections in 1977 and MLCC in 1978 – tested the MGEA’s legal rights and took job action. From then on, it was clear that government employees in Manitoba did, and could, go on strike.

Throughout the next decades, the MGEA grew steadily, expanding to recruit members working in arts and post-secondary institutions, health care facilities, and social service agencies. At the fiftieth annual convention in 1992, the organization changed its name to the Manitoba Government Employees’ Union.

Today, the MGEU represents the interests and concerns over 32,000 Manitobans who work in a variety of sectors. To reflect this diversity, it’s now known as the Manitoba Government and General Employees' Union. 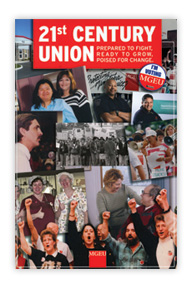 Want to know more recent MGEU history? Contact us for your free copy of 21st Century Union by Doug Smith.