Who we are, what we do 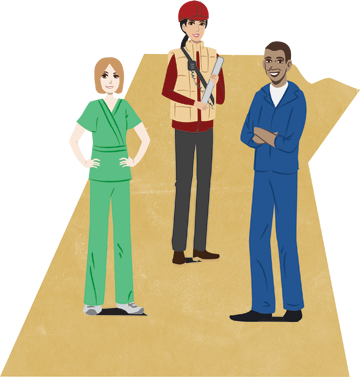 The Manitoba Government and General Employees’ Union represents approximately 32,000 working Manitobans. MGEU members live and work throughout Manitoba and in a wide variety of workplaces ― a large proportion of the MGEU's membership are employed directly by the Province of Manitoba (referred to as Civil Service members), while others work in crown corporations, universities and colleges, health care facilities, social service agencies, and arts and cultural organizations.

In other words, the MGEU represents members who are as diverse as the services Manitobans enjoy every day.

MGEU “activists” elected from the membership work closely with professional MGEU staff to:

Every second October, the MGEU holds a biennial two-day Convention.

Each Local elects a delegate or delegates (depending on the size of the Local) to the Convention where they set strategic priorities, develop policy, and elect the union leadership.

Throughout the year, the elected MGEU President works alongside MGEU staff to carry out day-to-day union business. Each month, an elected Board of Directors, including the president and four vice-presidents, meets to report to each other and oversee ongoing union activities.

Every two years, at a Local meeting, members elect a chief steward and president to act on their behalf. The chief steward is responsible for responding to concerns in the workplace, while the president acts as meeting chair and bargaining representative.

Depending on the number of members in a Local, a vice-president and members-at-large can also be elected to provide greater representation.

Depending on its location within the province, each Local also belongs to an Area Council.